European immigrants arrived on the shores of the Rio de la Plata in South America, in the two port cities of Montevideo, Uruguay and Buenos Aires, Argentina. Most of them were Italian and Spanish, and the vast majority were single young men looking to make their fortunes in America. They brought their music: the sweet sounds of the violin, the driving flamenco guitar, the strange mournful wail of the bandoneon – and their dances: the waltz, the mazurka, the polka – and mixed them with the Argentine folk music and dance, with the Cuban habanera, with the African candombe rhythms from the freed slaves’ street parties. With very few women around, many of these young men found themselves looking for excitement in the bordello districts of the burgeoning port cities. The tango dance arose in these seedy waterfront areas from this turbulent mix, becoming a “mating dance” between barmaids and their customers in shady nightclubs. Shunned by the upper and middle classes in Argentina, it nevertheless became a sleazy fixture of urban nightlife in Buenos Aires. Young men in neighborhood gangs would practice the steps with each other in order to become skilled enough to win the attentions of a woman. A beginner would often dance the follower’s part for six months to a year before being shown how to lead.

As Argentina became very wealthy around the turn of the century, the sons of rich families would often look for adventure and excitement in the rougher parts of town, and learned the tango as part of their escapades. Some of these young men of privilege would show off the tango as a treat for their friends on their sojourns to Paris, then the cultural capital of the world. The Parisians were shocked and titillated by this raw, sensuous dance. This led to a “tango craze” that swept all of Europe, and reached America in the years just prior to World War I. New York newspapers in 1916 feature ads from over seven hundred tango establishments. While the original tango was disturbing to many arbiters of good taste, a heavily sanitized version of tango found its way into the European and American dance academies, where it remains a fixture in ballroom competitions today.

Today the girls and I took to the streets of Caminito la boca to explore and experience and immerse ourselves in the tango culture and we did it on a cloudy day but it was so wroth it.

Here are few shots of our day in the small port city called Caminito and here you will see tango dancers on the street just dancing their hearts out. 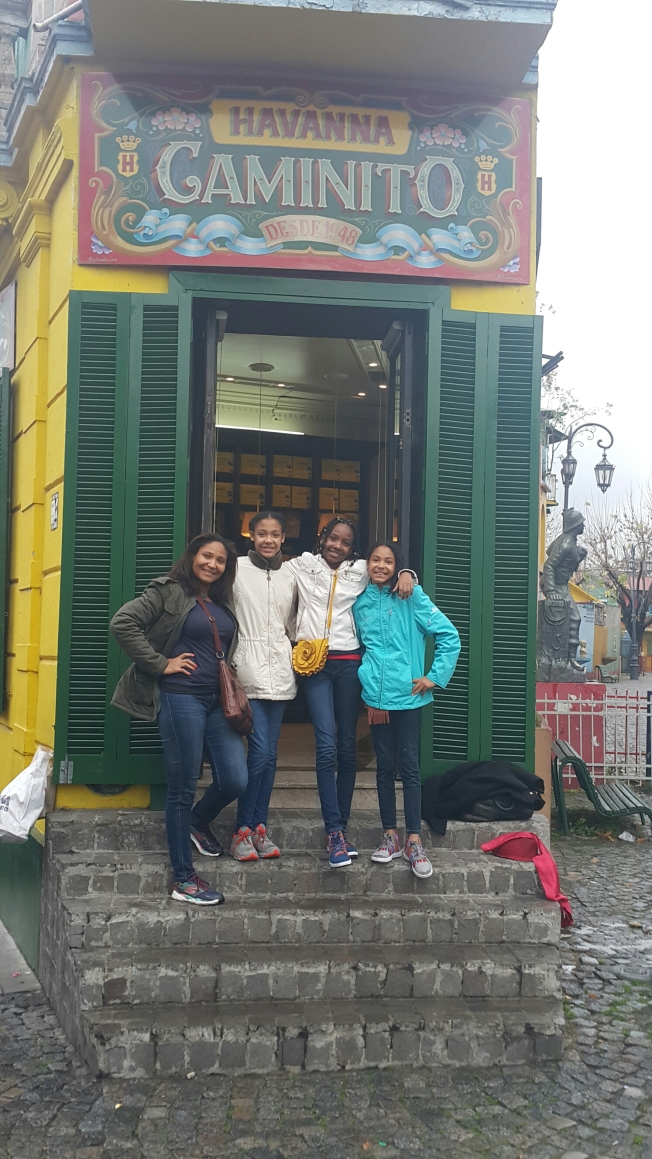 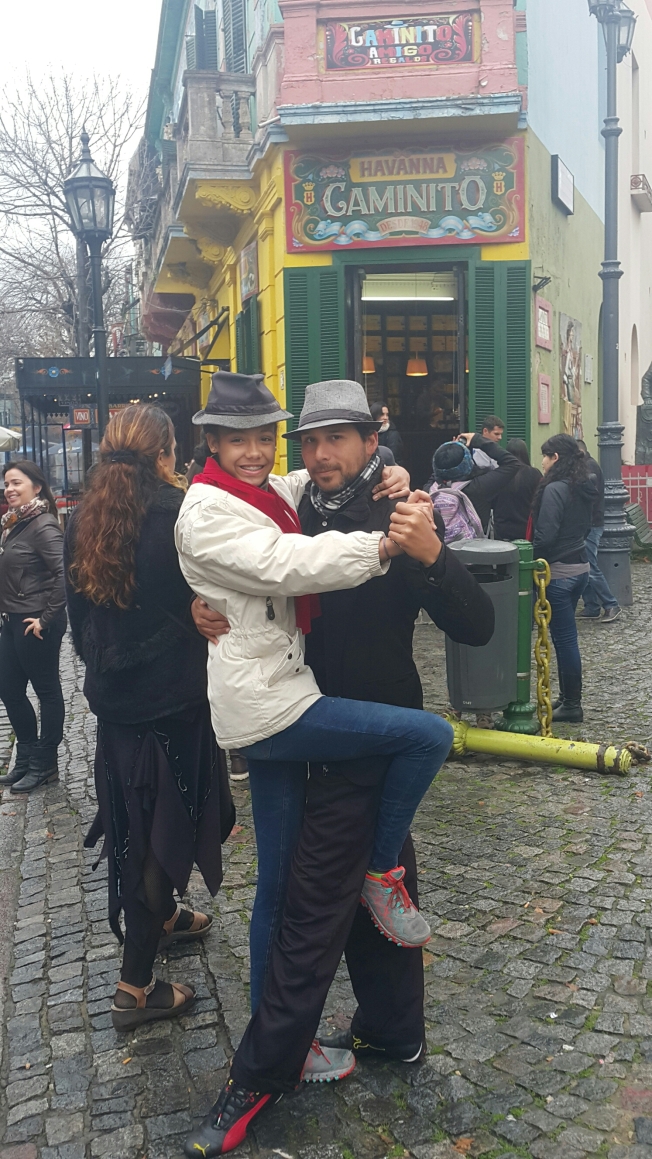 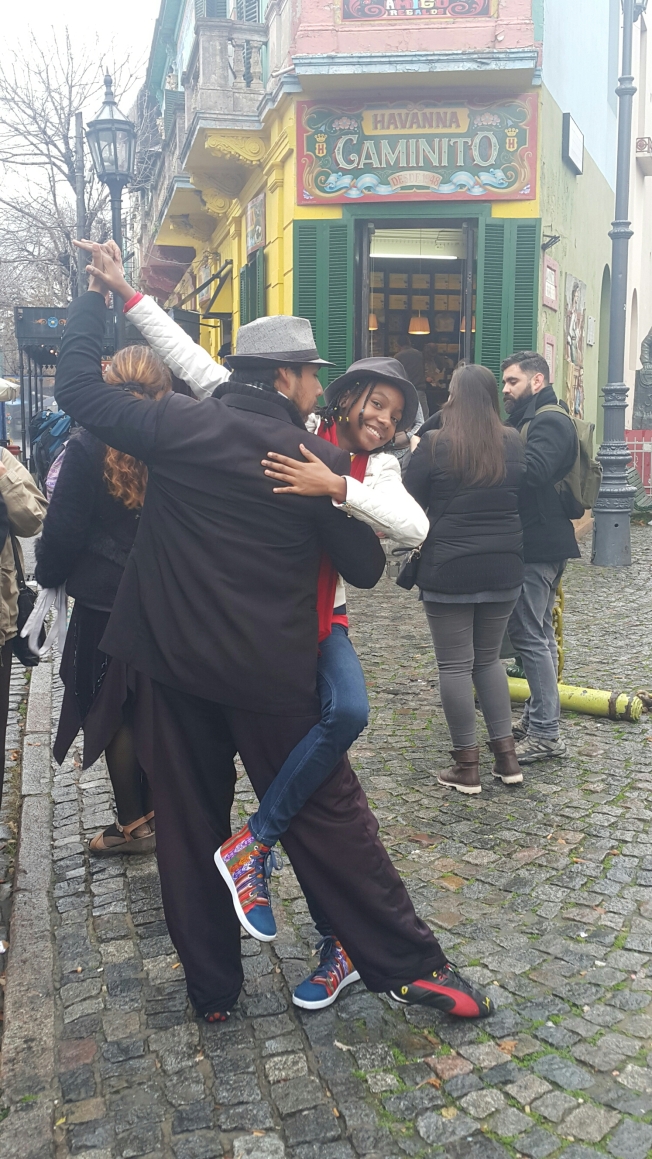 She was loving it 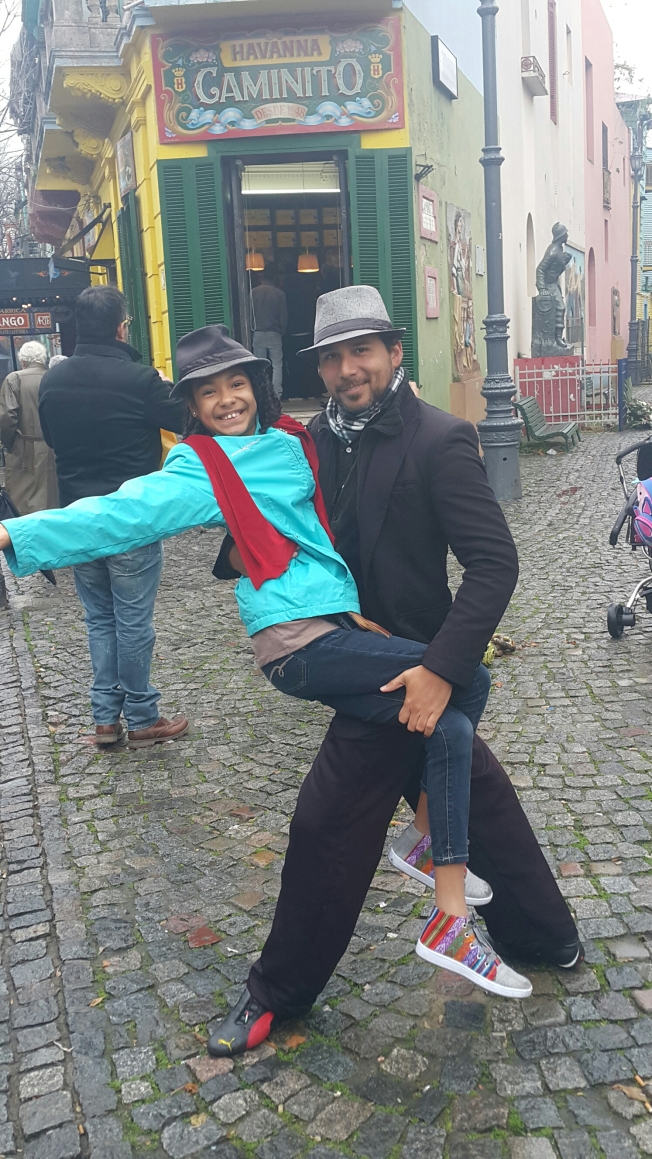 And she just took it to the next level 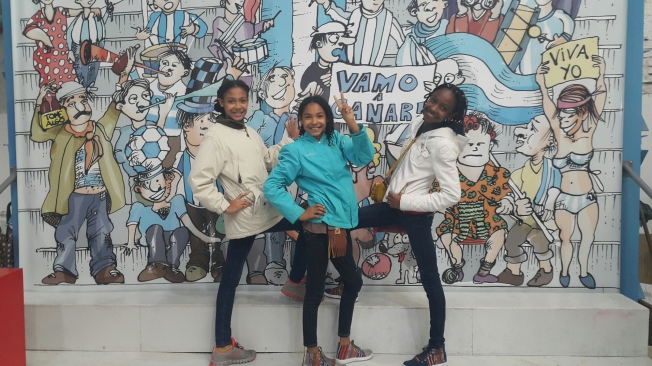 Sisters for life….where is karama? 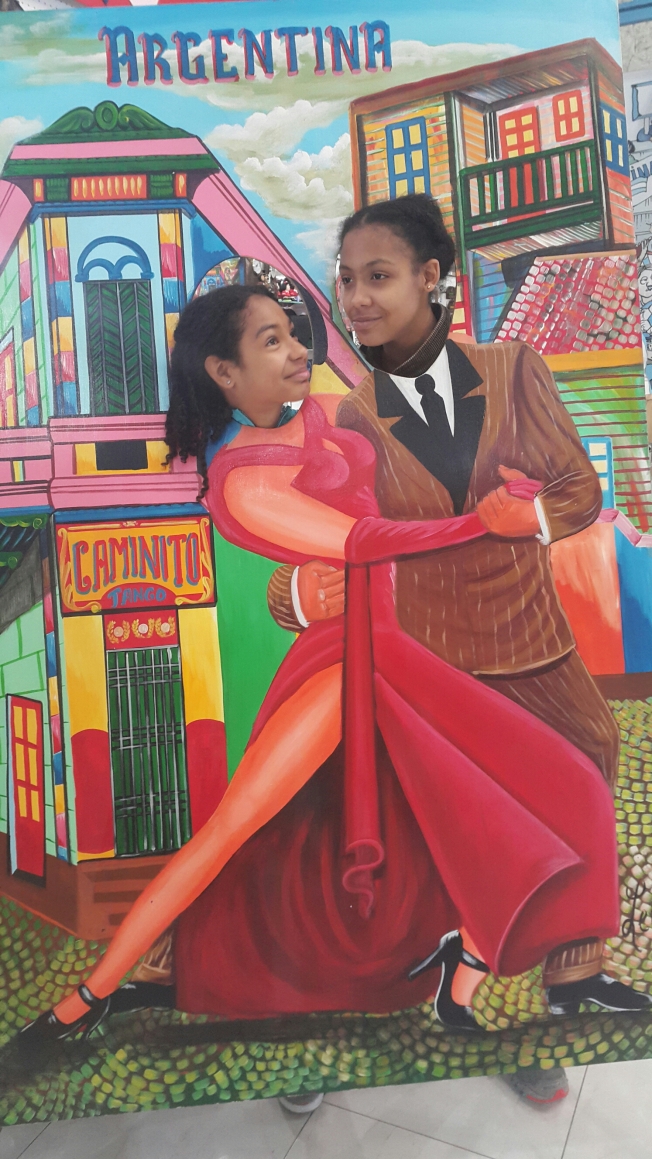 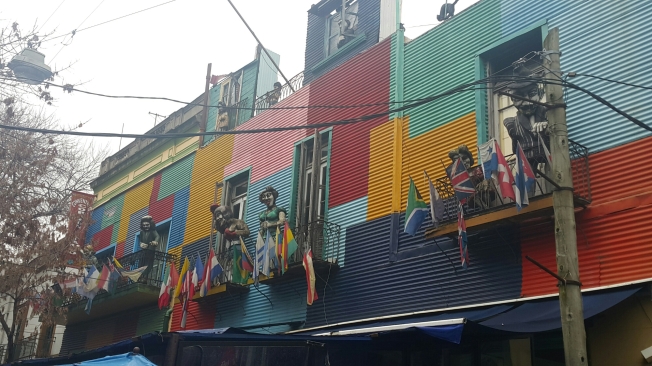 Such an amazing town…. 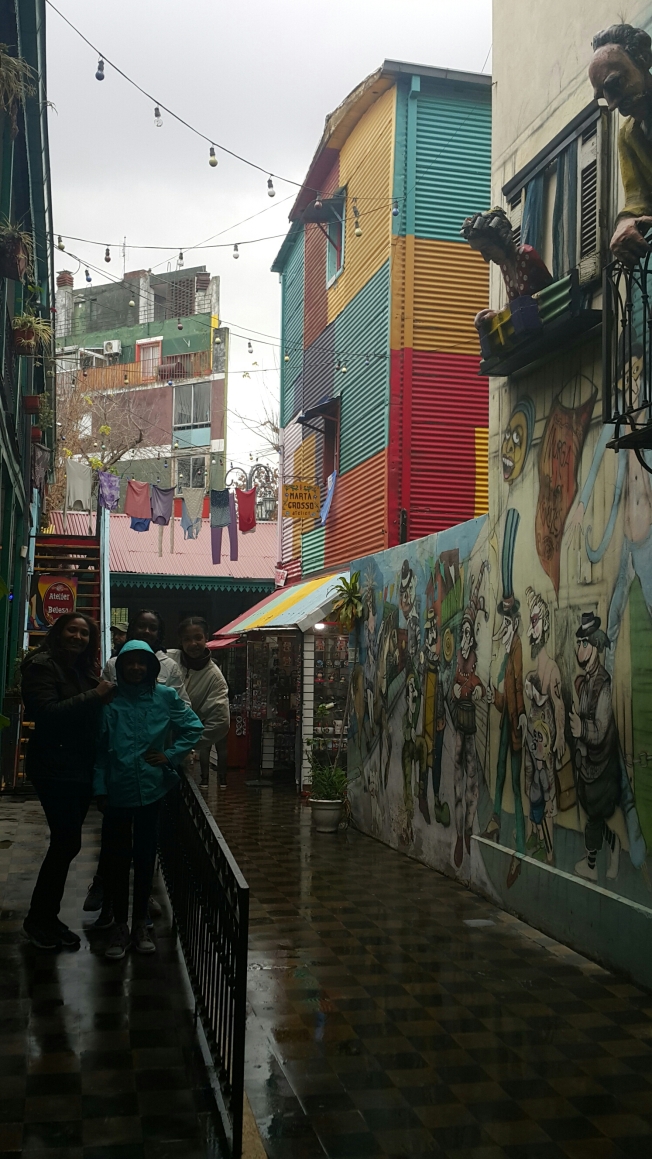 Just art all around us… 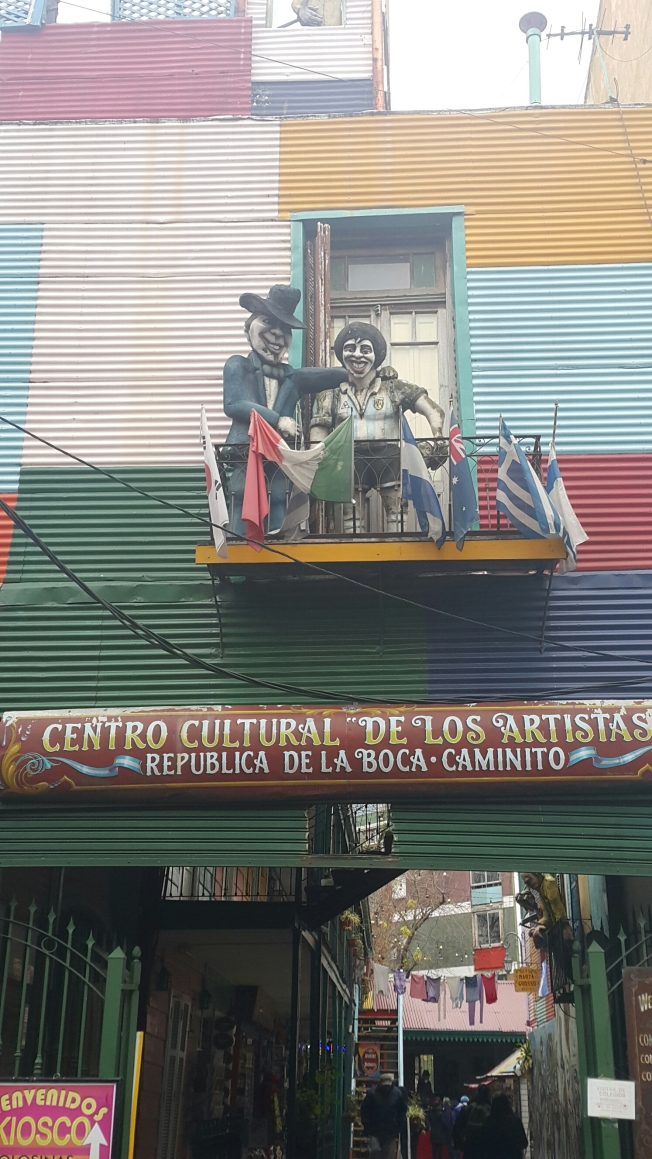 All about tango dance and art 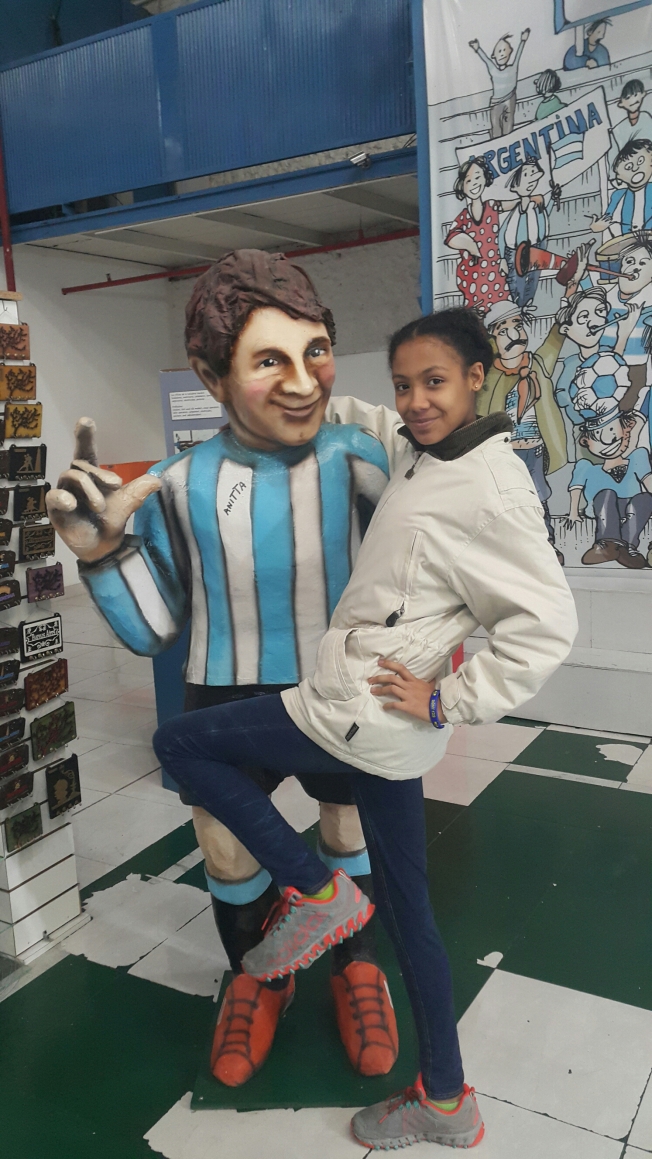 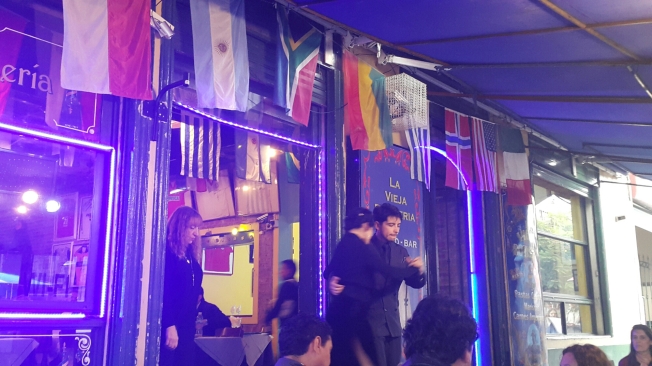 Live tango dance while having lunch 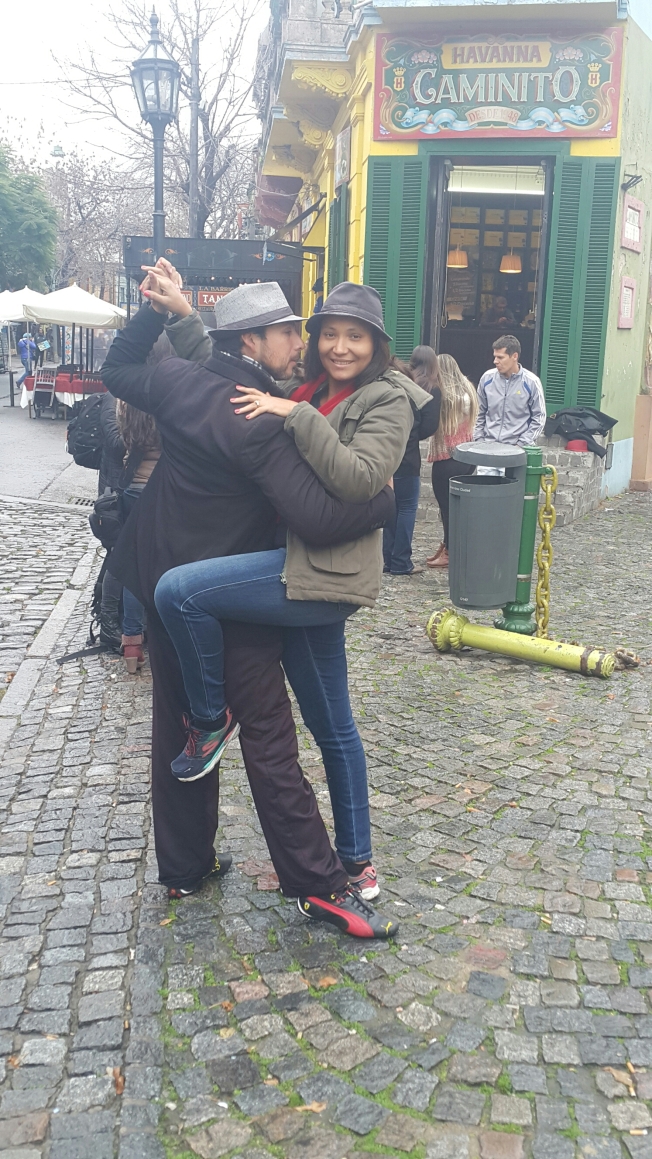 Such an awesome experience for me and my kids today….

Thanks to all the dancers on the caminto la boca street. 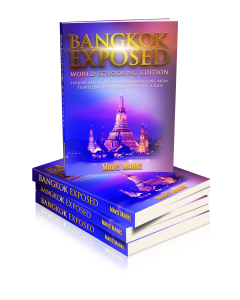 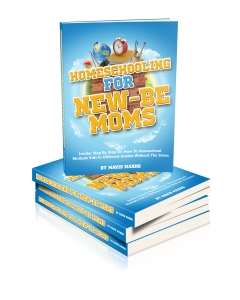